Skip to content
AGBC Munich February Hybrid Event: Back to the Future – Spies, Espionage and Romeo AgentsRalph Phillips2022-02-02T14:59:32+01:00
For privacy reasons Google Maps needs your permission to be loaded. For more details, please see our Privacy Policy.
I Accept 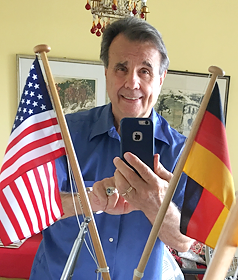 As past President of both AGBC National and  AGBC Bonn, Mr. Bawell will lead-off with a brief outline of his background with the club.  Then he will proceed to his core topic for the evening – espionage during last years of the DDR.  .

Well before Mr. Bawell’s arrival at the United States Embassy in Bonn in 1983, the U.S. counter-intelligence apparatus knew there was a major leak of classified documents at the embassy. This was compartmentalized, need to know information, never shared until the March 13, 1991 apprehension of his former secretary, Gabriele Kliem, for espionage.  He will provide us an eyewitness-to-history story of betrayal and crushing disappointment told in the background of intrigue, nuclear threats, protest movements, the elimination of nuclear missiles in Europe, German reunification, and the status of US Forces.

Walter A Bawell, Colonel, US Army, ret. With two tours in Vietnam, command positions, Pentagon assignments and extensive tours in Germany during the Cold War as a Foreign Area Specialist, Colonel Bawell’s experience covered a broad geo-political spectrum.  And he just happened to be in Berlin on the date of the fall of the Berlin Wall on November 9, 1989.

As Chief of the Joint Programs Section, Office of Defense Cooperation, United States Embassy Germany, from 1983-1987, he  organized and arranged negotiations between the US Department of Defense and the German Defense Department with regard to defense related projects including the stationing of nuclear capable Pershing II missiles. Subsequent to a command tour in Wiesbaden, Germany, Colonel Bawell was appointed as the Commander in Chief, United States Army Europe personal representative and adviser to the US Ambassador and to the German ministries of Defense, Finance, Construction and Transportation. He also was the Chief of the American Mission of the Sending States, responsible for successful renegotiation of the Status of Forces Agreement (SOFA) with the newly united German government.

After his retirement from the US Army, Colonel Bawell, worked for industry and later was elected as President of the American German Business Club, e.V. in Bonn from 2004-2013 and served as AGBC National President 1992-94.  He is currently an entrepreneur and consultant/speaker on foreign policy.

His book, “Cold War Germany 1983, One Minute To Armageddon: The German Secretary,” is currently available in Kindle format on Amazon:  https://www.amazon.de/Cold-Germany-1983-Minute-Armageddon-ebook/dp/B08CTL743X.

To attend online for free, please register using this link:
https://us06web.zoom.us/webinar/register/WN_4V_3pCLTTPKJmOq7Pah_ZA
After registering, you will receive a confirmation email containing information about joining the event. For those attending online, you will have to possibility to submit your questions in the Zoom chat function.

By registering for this event, I declare my consent regarding the inclusion of my personal details on the meeting participant lists and use of event photographs.
I hereby agree that my name (and company and profession details, if provided) may be included on the meeting participant list distributed at the meeting. In addition, I agree that photographs may be taken of me at events organized by and/or in association with the American-German Business Club Munich e.V. and that such photographs may be posted on the chapter website. This consent may be revoked at any time by contacting the AGBC Munich e.V. directly at: admin@agbc-munich.com.

Save this event to your calendar
Download iCal file

Event registration is closed for this event.